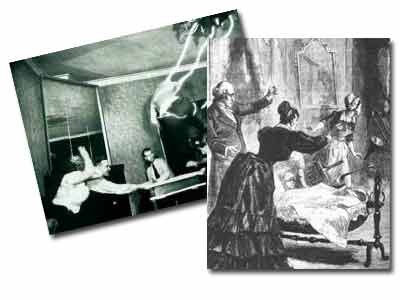 Whenever someone mentions the word poltergeist a few things may come to mind.  The word may instill some kind of fear in you, you may think of the 80’s horror movie Poltergeist or get images in your head of spirits tossing objects around trying hurting people.  I’m hoping this article will put to rest some of the myths about poltergeists and give everyone a better understanding of what the word really means.

What is a poltergeist?

Poltergeist is a German word that literally means “noisy ghost”(from German poltern “to knock” and geist “spirit”). They are commonly characterized as spirits able to interact with the physical world.

It was thought that spirit activity was to blame in this type of haunting situation, but research by parapsychologists Nandor Fodor, Alan Gauld, A. D. Cornell, and William Roll show that that theory might not be case.   They feel that a poltergeist isn’t even believed to a ghost and that a living person that acts as a human agent most likely causes poltergeist activity.

An adolescent female going through some sort of emotional changes or trauma is usually to blame, although any age group and gender may be the cause.  The human agent unknowingly releases their mental emotional energy built up inside of them in the form of manipulating or moving things with their mind (psychokenesis).  Apparitions may also be projected from the mind of the agent into the environment or even into the minds of others.

Parapsychologist William R. Roll, project director of the Psychical Research Foundation in Durham, North Carolina, defined poltergeist activity as Recurrent Spontaneous Psycho Kinesis (RSPK) and this term has replaced the word poltergeist in the scientific field.   Some still feel that this phenomenon could be from an actual entity though and not a human agent.  Ancient beliefs were quick to blame the Devil, evil spirits or malevolent ghosts.   It is also very likely many poltergeist cases are nothing more than tricky by individuals wanting attention.

A famous case poltergeist case called the Enfield Poltergeist Case took place in Northern London in 1977.  Many were witness to this events that took place and it generated much publicity.

What are some common signs of a poltergeist?

Note:  All of these signs could indicate a variety of disturbances and not necessarily poltergeist activity.

How can someone get rid of poltergeist activity?

It seems most cases of RSPK go away by themselves in a few months.  Other cases may require the human agent to admit that they are the ones causing the activity and getting them admit that causes it to stop.  Psychological help may also be a good option to find out what is bothering the person involved to help resolve underlying issues related to the phenomenon.

Can poltergeists harm you?

Chances are the activity will only be mild in nature but a it is possible for someone to get hit by a fly object.   Parapsychologist Loyd Auerbach has stated injury in unlikely and if anyone is injured its usually the human agent themselves.

How can you tell if a haunting is caused by RSPK or a real entity that is moving objects?

No way exists to tell the difference between the two, but RSPK will usually center on an individual person.  That person is usually close by or always present in the area when the activity occurs.   If an entity is making sounds or moving objects, the activity will happen regardless of who is around and it is commonly isolated in a specific area or in a location with a history of the occurrences taking place.