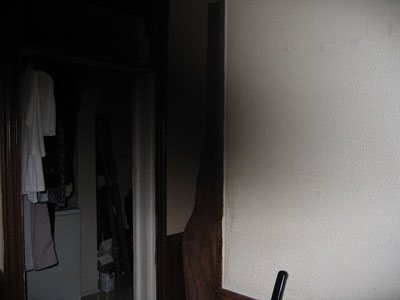 We receive many reports of what are commonly called shadow people or shadow figures.  What are shadow people?  Why do people see them?  Can they hurt you? Where are they from?  I’ll try to answer there’s questions and more in this article.  As always, please feel free to contact S.P.L.A.T. directly should you have any additional questions.

Shadow people are probably our biggest reported paranormal phenomenon.  They have recently been a hot topic in the paranormal community and have even been mentioned in tales of folklore.  They are said to black shadowy masses that resemble the outline of a person, but without any distinct features or details.  Sometimes they are reported to have glowing red eyes or maybe even a type of hat.

Most people say to witness shadow people only briefly out of the corner of their eye before they disappear, or vanish through a wall or around corner.  We have heard reports of them being seen for an extended period of time, but this seems to be an exception.

A lot to theories exist as to what they might be.  Below is a list of possible paranormal explanations:

Those who claim to see them usually feel threatened by their presence.  This could be to due to the fact people are just afraid of something they can’t see and explain.  It could also be that shadow figures are malevolent and may in fact have evil intents. In any case, it is very rare, if not impossible for a shadow people to cause physical injury.

We feel most encounters with shadow people have a very scientific explanation.  One major contributing factor could be harmful electromagnetic fields (EMF).  Old, improperly shielded or damaged electrical wiring and devices usually give off high EMF fields.  These energy fields have been proven to affect the body in many ways.  They even cause a slight current of electricity to form inside you.  This can cause you see to see dark spots in your field of vision, not to mention many of other harmful physical ailments.

Another natural explanation is low frequency sound produced by fans, rattling equipment, or music.  Certain sound waves can cause your eyeballs to vibrate, producing shadows and other strange vision anomalies.  These sounds are below the range of human hear.

People who frequently report seeing shadow people at night while in bed may be suffering from some kind of sleep disorder called hypnagogia.  Hypnagogia is a disorder in which a person is mentally between a sleep and wake state.

Some other known causes of shadow figures can even be carbon monoxide or toxic vapors, drug use (legal or illegal), or some kind of mental illness.  As with all paranormal experiences you should always try to rule out natural causes before burdening yourself with unnecessary fear.

We can’t for certain whether shadow people exist.  We have had claims where multiple witnesses have seen shadow figures at the same time and we’ve even caught some strange dark masses on film without any know natural explanation.  Are the witnesses telling the truth?  Is the dark masses proof of shadow figures?  Why are most seen at night?

As with almost every aspect of the paranormal, there is a great lack of information and sold evidence.  We are in the midst of running experiments to try and obtain physical proof of their existence or even non-existence.  Please contact us if you or someone you know is experiencing a shadow figure.