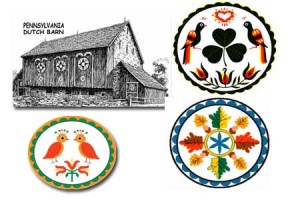 While researching some information at the library yesterday I came across a book that dealt with Pennsylvania Dutch hex signs.  For those of you who aren’t familiar with them they are circular symbols full of colorful geometric images painted on barns throughout the state as a type of folk art. The book is called Hex Signs: Pennsylvania Dutch Barn Symbols & Their Meaning by Don Yoder and I highly recommend it for anyone interested in this topic.

The Pennsylvania Dutch refers to an ethic group that is descendants from German immigrants.  They arrived in the country prior to the 1800’s and settled in southwestern Pennsylvania.  This group includes the Amish and Mennonites communities, which can now be found throughout the state.  This group is not Dutch, but in fact German.  The German word for German is “Deutsch” and the English word Dutch derives from this. Pennsylvania Dutch farmers use these signs to signify various things.  The word “hex” actually means, “witch” in the German language.

It has been said that these symbols are painted on barns as a way of warding off evil spirits, but in actuality no one knows their true origins.  Some say they are simply art, while others say they are used to uniquely identify and promote the Pennsylvania Dutch heritage as type of ethnic symbol. Their popularity is a recent event and not much information can be traced back to European use of the symbols.  In the 1800s it was rare for anyone to even have the finances to paint their barns.  It is interesting to note that the Amish actually refuse to use the symbols due to their beliefs even though they are part of the Dutch community.

Chances are you may have seen hex symbols before, but never really thought about what they were.  I know that personally my grandparents have a hex symbol of a distlefink on their garage and I did not come to realize what it was until recently.  The distlefink represents good luck and is modeled after a goldfinch bird.

If you are ever out driving the beautiful Pennsylvania countryside’s, pay close attention to local barns and maybe you will get to see an authentic hex symbol for yourself.