EMFs (electric and magnetic fields) are invisible energy fields produced by flowing electrical current.  Energy fields in this range are referred to as ELF or extremely low frequency (3-3,000Hz).  You can see by the chart below where exactly ELF fits in the electromagnetic spectrum.

How are EMFs measured?

Electricity is transmitted at 60Hz AC in the United State and most meters are calibrated for electrical testing purposes to measure EMFs in this range. EMF strength is measured in milligausses (mG) or in Teslas (T) outside the U.S., using specialized devices called EMF (Gauss) meters.  EMF meters were never designed for paranormal research and they should not be used to try and directly detect ghosts.  They are mainly used to only rule out natural sources of EMF causing someone to think they are having supernatural experiences. 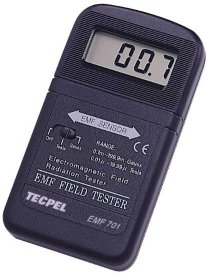 What danger do EMFs pose to humans?

It has been found that high EMFs due to faulty house wiring or malfunctioning electronic devices are the cause for someone experiencing alleged spirit activity.  Alternating magnetic fields produced by AC power are said to create a weak flow of electrical current in the human body.  Exposure to high EMF is under debate, but many claim it can cause symptoms such as headaches, anxiety, suicide, depression, nausea, fatigue, and loss of libido, not to mention paranormal experiences.

The National Institute of Environmental Health Sciences (NIEHS) and The National Institutes of Health and the Department of Energy put together a six-year study on the health effects of electric and magnetic fields (EMF).  The study indicated no effects could be measured within humans or lab animals with the exception of a small increase in leukemia in children and adults in areas with high EMF.

What are safe levels of EMF?

No standard safe EMF level exists because there are still a lot of unknowns when it comes to EMF.  It is generally thought that ambient (normal) levels are around .5mG to 1.0mG in most homes. The Environmental Protection Agency has set a 1mG as their safety standard but other organizations have no set standards.

Why do ghost hunters measure EMF?

The main reason EMFs are measured is to rule out exposure to high EMFs as being a natural cause for paranormal occurrences.  Another reason is that theories exist saying locations with spirit activity will cause spikes in the ambient EMF levels for no apparent reason.  This could be because an entity, assuming it’s made up of some type of energy, is attempting to manifest itself and in the process is disrupting the energy around it.

The human brain transmits information throughout your body using low levels of electrical current.  Could it be that our energy continues on after death?  Can this energy have a lasting effect on the surrounding environment?  Can certain mineral deposits trap this energy?  As you can see there are a lot questions to be answered when it comes to EMFs in the paranormal field.

Humans hearing ranges from 20Hz to 20kHz and it commonly expressed in decibels, which measure the intensity of the sound..  Infrasound is all the sound produced below the range of human hearing (below 20Hz).  Sound in this range causes a variety of physiological effects when someone is exposed it.  These symptoms can include seeing shadows, nervousness, dizziness, fatigue, anxiety, fear, and chills.  A lot of these symptoms are similar to high EMF exposure. 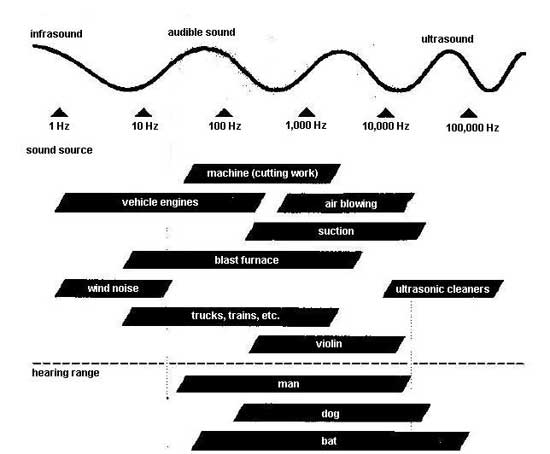 A report by NASA (Technical Report 19770013810) actually mentions that sound waves around 18.25Hz cause the human eye to vibrate, producing a smearing effect.  It could be that this smearing effect and other symptoms are the direct cause for someone to see what they think shadow entities.  It can also cause a lot of the other common feelings someone gets in a haunted location.

Infrasound has been known for quite some time.  Detection devices were employed during the Cold War monitor for possible atomic bomb blasts.  It has been developed for use in certain weapons by amplifying the sound to produce pain in internal organs. Windmills have come under a lot scrutiny for producing potentially harmful infrasound for people living close to them.

Below is a list of some common sources of infrasound:

Research by Vic Tady, a lecturer at Coventry University in the U.K., discovered that sound produced around 18Hz was causing paranormal like activity to be experienced by people working in a research laboratory.  He found out a fan in the lab was producing infrasound and when the fan was shut off the paranormal activity stopped.  Mr. Tady went on to write a book called The Ghost in the Machine, which goes into greater detail of his experimentations with infrasound and the paranormal.

Could it be that many alleged shadow entities and haunted feelings are nothing more than the adverse affects of sound waves?  What if most ghostly voice phenomena are emitted in the ultrasonic range (sound above the range of human hearing)? I think more research needs to be conducted on infrasound in the paranormal field and it should be checked for and ruled out in reported haunted locations where one might suspect it as a possible cause.