I watched an interesting film last night called The Wickerman.  It was a 1973 horror film directed by Robin Hardy.  It’s about a police officer who investigates the disappearance of small girl on a remote island in Britain.  While there, he uncovers bizarre rituals and the truth to disappearance of the girl.  The Wickerman movie is based on ancient Celtic rituals where druid priests would burn men alive inside of giant wooden wicker statues in order to make sacrifices to their gods.

SPLAT has discovered that this ancient practice still takes place by neopagans and other religious sects, even right here in Central Pennsylvania.  Actual humans don’t get sacrificed anymore, that we know of, but the act of burning a Wickerman does. We would love to hear from anyone with more information regarding this practice.  Check out http://www.wickermanburn.org for more information about the ceremony that is taking place. 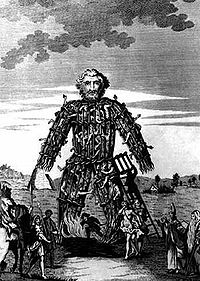