Home »»  Tech Posts »» Defending the Internet…One Page at a Time

Many of us here in the United States take our freedom for granted, especially when it comes to accessing the Internet. We take for granted being able to go onto YouTube, anytime we like, to watch our favorite videos or loading up Google and searching for whatever it is we are looking for. Many people, unfortunately, don’t have that freedom.

Government censorship across the globe blocks access to many different websites and to knowledge and ideas on them. The Internet Defense League was founded in 2012, to help address this issue and offers help to those who live in countries where censorship exists. 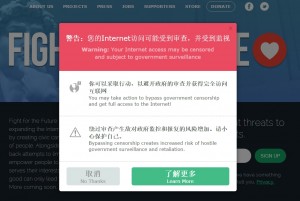 The way it works is you embed some lines of html code in your website, or add a widget, as I did with my WordPress site. Whenever someone visits your site from a country, censoring the Internet, an overlay pops-ups with a link to information and help on circumventing Internet censorship.

I tested the pop-up and one way it recommends circumventing censorship is by using VPN (virtual private network ) software, such as Express VPN (https://www.expressvpn.com/what-is-vpn). For those of you not familiar with VPNs, they allow you to tunnel through censorship filtering and provide an encrypted, secure, and anonymous Internet connection tunnel to where you are connecting. VPN software is a great tool for not only getting around censorship, but also for securing your data from thieves and anyone who wants to track your online activities. It’s often deployed by corporations as a way for remote office workers to connect to company networks.

Many popular websites and organizations already support The Internet Defense League, such as Mozilla, WordPress, and reddit. I think an open and free Internet is not just an American idea, but an important freedom all Internet users should have. Joining this organization and enrolling my site is the least I can do, both as an IT professional and American, to help support this cause.