My dad (Walter Sr.) recently entered retirement and I was FINALLY able to talk him into getting the Internet and a computer. This was no easy task. He’s in his mid-50’s and has never owned or used a PC before so getting him to agree to try and use a computer was a big deal.

While growing up in the 80’s and 90’s, we had computers in the house, but my dad never wanted anything to do with one. I thought that by getting him a computer, it would be a great way for him to keep busy, stay in touch with family and friends, and learn new things.

I fixed up an old computer from spare parts I had and loaded it up with Ubuntu. I chose Ubuntu because I knew I wanted something that was secure, simple and easy to use. From past experience, I didn’t think a Windows system could meet his needs. Don’t get me wrong, I like Windows and use Windows 8/10 on a daily basis, but it can be a challenging for new computer users and they often find themselves with frequent virus infections and unwanted programs, which turns into a call to me to get things fixed. By design, Linux isn’t as prone to viruses and spyware and its more difficult to accidentally install unwanted software. Ubuntu and many other desktop Linux variants are free. Free beats having to pay for a Windows license.

Ubuntu was very easy to install and there was little to configure after installation. All the device drivers, including the add-in wireless card worked from the start. I created him Gmail and Facebook accounts and customized Firefox to load up Gmail, Facebook, YouTube and Google automatically so he could easily get started with exploring some of the most popular sites on the Internet. I even installed Skype and webcam so he could keep in touch with my brother and his family down in Georgia.

For a while I thought Ubutu was a great OS for him…… I thought that until I started to get phone calls from him about problems he kept having. He had a tough time being able to launch Firefox and get to the tabs he wanted. I blam most of this of Ubuntu’s Unity interface. It was difficult for him to maximize and minimize windows  because the menu for Firefox would become part of the toolbar at the top of the screen.

Another problem he had with it was having to enter a password upon boot or when programs needed updated. He wasn’t used to the concept of a username and password so I initially tried to configure Ubuntu to not require a password. Removing a password from his account was rather convoluted to accomplish and didn’t end up working out well.

I wanted to be able to put customized icons on his desktop for launching FireFox, Libre Office and Skype, but I couldn’t do this so he was stuck with small icons on the task bar, which he had trouble seeing and clicking due to his poor eyesight and health. And getting his system to shut down or restart was another challenge because he had to click through a few options on the menu to be able to do this. Being a new computer user made it difficult for him know how to accomplish simple tasks many of us take for granted, even after a few remote TeamViewer sessions with me showing him how to do it.

I finally gave up trying to get Ubutu to work for him. I did some research on other popular Linux desktop operating systems and discovered Mint. It did everything Ubuntu couldn’t do.  I was able to easily eliminate the need for password prompts. I could also now put custom sized icons on the desktop for him to use so I made a giant FireFox shortcut icon for him and even big a red shut down icon that could shut the system down in once click. 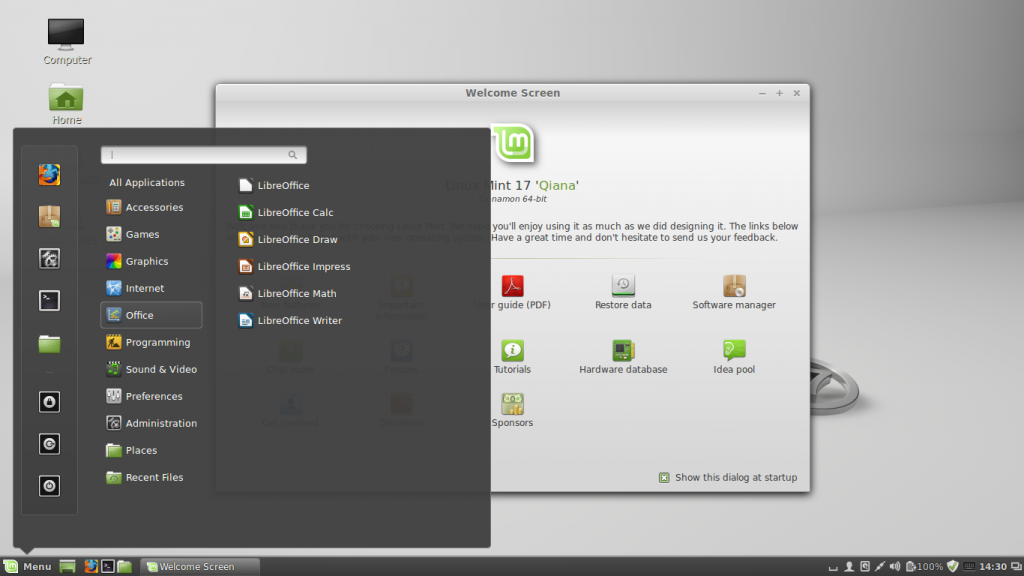 In the end, Mint’s Cinnamon interface made using a computer much easier for him. It’s very similar to Windows, but without all the problems that Windows brings with it. My dad caught on to using it in no time. Soon the nightly phone calls to me dropped off and he’s been using his system with very little help from me.My next goal is to get him a tablet so that he can sit back and use Facebook and some other services all from the comfort of his couch.

Hopefully my article gives you some insight into Linux Mint and how choosing an operating system for a new computer user can make a big difference for them.