Team leader Jamie was invited to have S.P.L.A.T. look into this case.  The clients for H7-1 were family of Jamie’s wife.  So of course S.P.L.A.T. agreed to look into their claims and investigate the home.  S.P.L.A.T. members Jason and Jamie went in on the scheduled weekend and did the preliminary investigation which always includes the interviews, some baseline readings of the home, and taking some pictures of the location to be investigated.  On that first run through, nothing seemed out of the ordinary.  That would change during the main investigation.

The claims were quite extreme.

The following weekend, S.P.L.A.T. team members Jason, Jamie and Tony with trainees Davey and Ben went to do the main investigation.  More thorough baseline readings were taken, the home was documented, and all of the equipment was put in place.

Since the most prominent claim of the client was that of the communication via the air conditioner, we based our entire investigation in the living room and dining room.

All of the investigators and the clients sat quietly in the living room for a short while to allow the environment to calm down.  Then we proceeded to provoke the claimed intelligent entity to start “talking” with us.  Jason drove the session forward by questioning the entity and pushing for answers.  Then we started to see some vague responses from the air conditioner.  It would at first randomly turn on and off, sometimes it would turn on and stay on, and sometime it would flick on and off rapidly.  We directed the entity in question to respond to us with turning on the AC and leaving it on for a “yes”, then to turn on the AC and then directly off for a “no”.

As the evening went on, the supposed responses seemed to get more accurate.  However, our interpretation of the answers seemed to change to on and off for “yes” and on-off-on-off for a “no”.  It also turned on and off rapidly for about a dozen times and the client claimed that was a laugh.

The clients played into the other pieces of equipment acting up as if the entity was causing the activity.  However, the motion sensor was being turned on by a fly in the room, and the interference on the walkie talkies was replicated by causing interference with other communication devices.   It was also found that each time a fluorescent light was turned on, it would cause the IR proximity sensor to react.  Fluorescent lights will activate the IR sensor.

While the supposed entity was “talking”, there were no variations in temperature nor were there any observable EMFs on either of the EMF meters.  It was also found that during the session, Tony taped over the IR sensor that was on the air conditioner.  The “talking” stopped until the tape was later taken back off.

With this discovery, all of the investigators went out of the home to investigate the homes next to the client’s as well as check out the AC from the outside.  The two clients remained in the home and continued to “talk” with the entity.  There were quite a few homes nearby where we could see people watching TVs, playing games, or had ACs of their own.  All of these items may include IR remotes which could possibly have been causing the client’s AC to do what it was doing.  However, when the team reentered the home, the “talking” seemed to get more accurate.  Some of the questions seemed to have responses right down to the second of them being asked.  We are uncertain as to how this could have been happening, other than the possibility of one of the following options:

S.P.L.A.T. was very eager to reenter the home and continue their process with a secondary investigation; however the homeowners would not allow S.P.L.A.T. back into the home.  So this summary of the investigation is only our speculations as to what may have been happening.  Unless we get permission to continue our investigation, we may never get those answers. 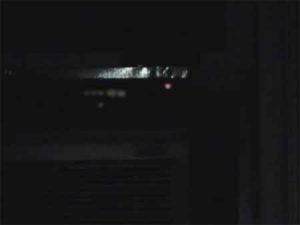 Simply, we had a two hour conversation with an air conditioner and now I have no way of knowing what caused such activity.  Was it a spirit or was the wool being pulled over our eyes?  It doesn’t seem like we will ever get to know and boy is that frustrating.  My personal view though?  I don’t feel there was any intelligence to that conversation.  I feel there was more to it than a talkative spirit.